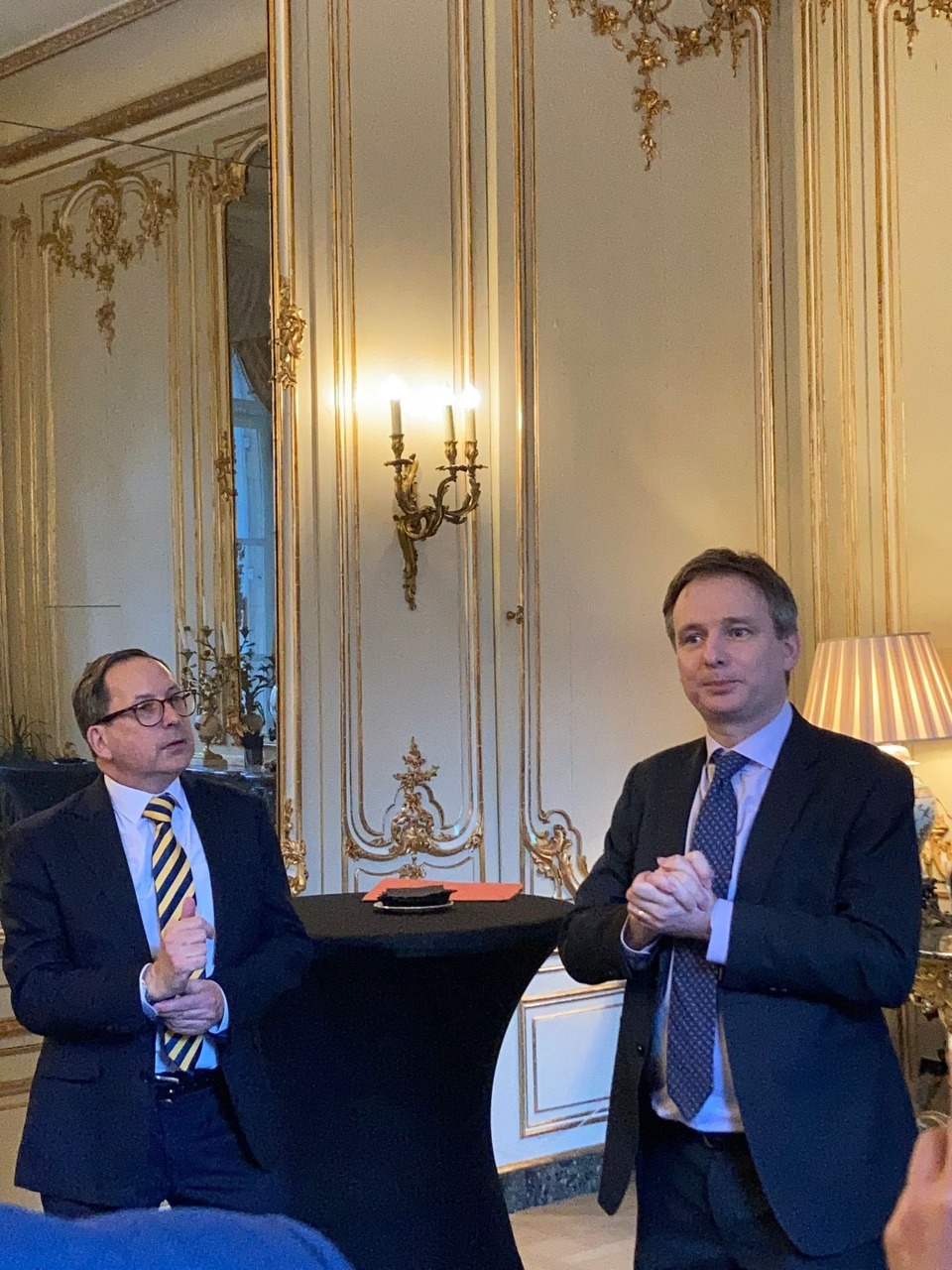 Mark with UK Ambassador to the EU, Lindsay Croisdale-Appleby CMG

Transport policy was already undergoing a seismic change in order to become more resilient and sustainable, to learn from the lessons of COVID to protect delicate and complex supply chains and finally, to respond to the climate crisis as the fastest growing source of CO2 emissions.

The pace of change has now intensified following the Russian invasion of Ukraine, and transport – as the fastest growing consumer of fossil fuel and emitter of CO2 – now has the additional challenge of transitioning away from fossil fuels, particularly Russian coal, oil and gas.  As you will read below the EU is increasing its efforts to pile the pressure on Russia with stronger sanctions, however in tandem, the EU is facilitating the transformation of European transport through increased investment in infrastructure which is sustainable in the hopes of being climate-neutral by 2050.

The UK has already embarked upon a similar transformation, and in particular it published its Transport Decabonisation Plan in July last year, the same month the EU published many of their Fit for 55 proposals, both UK and EU aiming to ensure the transport sector decarbonises.

As we approach the first anniversary of their publication, I think it is a good time to take stock. Where is the best practice we can share, what are the hurdles we still need to overcome, where are the areas of policy and regulatory change where the UK and EU need to deepen their coordination, and what else do we now need to do in light of the war in Ukraine. UKTiE will be appraising these important questions in coming weeks with our members, partners, industry stakeholders and the UK Government and EU institutions.

Co-ordinating transport, energy and environmental policy is a massive and complex task, not least at this time of unprecedented uncertainty, but as Frans Timmermans, European Commission Executive Vice-President in charge of tackling climate change, recently said quoting Ian Drury and the Blockheads, there are reasons to be cheerful: ‘we are still on track to be well below two degrees, we still have a shot at 1.5 degrees.’

Do let me know if you wish to join and contribute to this important project.

This week’s song of the week is: Ian Dury and The Blockheads – Reasons To Be Cheerful, Pt. 3.

1.    Clean energy spending in governments’ economic recovery package has surged by 50% since the end of October, reaching unprecedented levels.
According to a recent publication by the International Energy Agency clean energy spending now stands at over USD 710 billion worldwide. This unprecedented amount of spending is more than 40% larger than the global green spending contained in the stimulus packages that governments enacted following the global financial crisis in 2008. Advanced economies account for the bulk of that spending, with over USD 370 billion intended to be spent prior to the end of 2023. Across emerging and developing economies, however, the total amount of fiscal resources being dedicated to sustainable recovery measures is one-tenth of the amount in advanced economies, reflecting their very different financial and economic circumstances. Rising fossil fuel prices, which have been exacerbated by Russia’s invasion of Ukraine, have pushed governments both to enact immediate measures to make energy more affordable and to explore efforts to reduce fossil fuel dependency.

2. Projects selected from the Connecting Europe Facility to upgrade European rail
A total of 37 projects will receive 425 million. The projects will help upgrade Europe’s transport infrastructure to make them fit for civil and defence use. Commissioner for Transport Adina Valean said in a statement that “Europe’s Transport infrastructure is critical for our security, this is why we are taking concrete measures to support investments that make it fit, not only for civilian use, but also for our defence. We are funding projects worth 339 million that will facilitate the movement of military troops and assets leading to more efficient deployment of our missions on the ground”. Projects include railway infrastructure upgrades to allow the circulation of larger and heavier trains, as well as works to increase port and airport capacity and strengthen road bridges.

4. EU adopts fifth round of sanctions against Russia over its military aggression against Ukraine
The package comprises of –
(1) a prohibition to purchase, import or transfer coal and other solid fossil fuels into the EU if they originate in Russia or are exported from Russia, as from August 2022.
(2) a prohibition to provide access to EU ports to vessels registered under the flag of Russia. Derogations are granted for agricultural and food products, humanitarian aid and energy. A ban on Russian vessels was implemented by the UK on March 1st .
(3) further export bans, targeting jet fuel and other goods such as quantum computers and advanced semi-conductors, high-end electronics, software and new import bans on products such as wood, cement, fertilisers, seafood and liquor.
(4) a full transaction ban on four key Russian banks representing 23% of the market share in the Russian banking sector.

5. The Council adopts proposals to ensure the continued long-term supply of medicines from Great Britain to Northern Ireland, Cyprus and Malta
Under the Northern Ireland Protocol of the Withdrawal Agreement, Northern Ireland has continued to follow the EU rules after the end of the transitional period, while Great Britain now has a freestanding independent regulatory regime. This means that there are two sets of rules that apply in the UK, which has led to difficulties with medicines, and other products, moving from GB to NI (the route by which the majority of products reach the market in NI). In practice, this meant that medicines coming from Ireland and France were easier to acquire and not subject to checks at Northern Ireland ports. Last year, Boris Johnson threatened to invoke Article 16 of the NI protocol which allows for unilateral action on both sides should the application of the protocol give rise to ‘serious economic, societal or environmental difficulties that are liable to persist, or to diversion of trade’. This new deal seeks to alleviate these trade difficulties and will ensure the continued long-term supply of medicines.

6. EU blacklists Russian airlines
The EU has added 21 Russian-certified airlines to a list of companies banned from flying in the EU due to ‘serious safety concerns’. Under EU sanctions, the bloc’s multi-billion-euro aircraft leasing sector, mainly based in Ireland, is no longer permitted to provide aircraft to Russian companies, nor to certify the airworthiness of the aircraft. US and EU aircraft manufacturers have also blocked access to spare parts needed for aircraft maintenance. With Russia refusing to return leased aircrafts, most lessors have been forced to write off the value of the planes. This will have huge consequences for future leasing and sureties in Russia’s aviation industry in the coming years.

–    The Allocation of slots at EU airports: common rules recast is awaiting the Council’s first reading position. This proposal aims to ensure that access to congested airports is organised through a system of fair, non-discriminatory and transparent rules for the allocation of landing and take-off slots so as to ensure optimal utilisation of airport capacity and to allow for fair competition.

9.  Upcoming events
–    Connecting Europe Days will host an event from the 28-30 June, this is Europe’s mobility flagship event and will be held in Lyon, France. The conference will bring together politicians, industry representatives and the European Commission to discuss transport and mobility, and their role in achieving the ambitious goals set out in the European Green Deal and the Sustainable and Smart Mobility Strategy. Participants will see state-of-the-art innovations first-hand at an exhibition of EU-funded projects, demonstrations of alternative mobility vehicles and automated transport.

–    The European University Institute, Florence together with FSR Transport will host a panel discussion entitled “Transport recovery: which role for railways?”. The panel will discuss how the stimulus package can accelerate the decarbonisation of transport with railways playing a central role in the process. The event is hybrid with more information at this link.

10. UKTiE has also put together the latest timetable of key transport and supply chain developments in Europe. We will keep this up to date as the process develops: