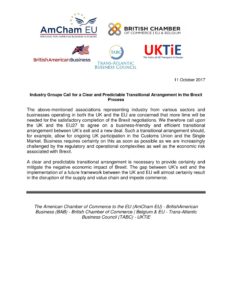 Brussels – A group of industry associations representing global companies operating in both the EU and the UK urge the Brexit negotiators to agree on a business-friendly and efficient transitional arrangement between UK’s exit and a new deal. The American Chamber of Commerce to the EU (AmCham EU), BritishAmerican Business (BAB), the British Chamber of Commerce | Belgium & EU, the Trans-Atlantic Business Council (TABC) and UKTiE (The Voice of UK Transport in Europe) today issued a joint statement (attached) calling for a clear and predictable transitional arrangement to be agreed on as soon as possible. This would provide additional certainty for businesses and mitigate the potential negative economic impacts for companies.

In the joint statement, the associations argue that a transitional arrangement should allow for ongoing UK participation in the Customs Union and the Single Market. Business requires certainty on this as soon as possible as they are increasingly challenged by the regulatory and operational complexities as well as the economic risk associated with Brexit.

Justine Korwek, Head of Office for the Trans-Atlantic Business Council, said: ‘A business-friendly and efficient transitional arrangement for as long as is necessary from the date of Brexit would provide additional certainty for businesses. Negotiations for a future EU-UK trading relationship will be extremely complex and time is already limited. The value of transitional arrangements diminishes the later they are agreed and communicated, so moving forward quickly is essential.’

The American Chamber of Commerce to the EU (AmCham EU) speaks for American companies committed to Europe on trade, investment and competitiveness issues. It aims to ensure a growth-orientated business and investment climate in Europe, facilitates the resolution of transatlantic issues that impact business and plays a role in creating better understanding of EU and US positions on business matters. Aggregate US investment in Europe totalled more than €2 trillion in 2016, directly supporting more than 4.5 million jobs in Europe, and generating billions of euros annually in income, trade and research and development.

British American Business (BAB) is the leading transatlantic business organisation, dedicated to helping companies build their business on both sides of the Atlantic. Its membership brings together the world’s leading multinational and middle market companies across sectors and geographies; and more than 100 of the world’s most successful CEOs support its work through their participation in its Advisory Board. It incorporates the American Chamber of Commerce (UK) and the British-American Chamber of Commerce (USA), which merged in 2000 to create a single, pre-eminent transatlantic organization that could support its members across the Atlantic.

The British Chamber of Commerce | Belgium & EU is unique: an international network that connects your business with other businesses, a wide spectrum of national and European policymakers, and customers and clients. We are the gateway to a global trade and investment business solution. Our network of business support services and partnerships with the UK Trade & Investment (UKTI), the Belgian regional investment agencies in Brussels, Flanders and Wallonia, and the European (COBCOE) and global network of UK Chambers of Commerce gives you the direct contact and connections you need to succeed.

The Trans-Atlantic Business Council (TABC) is a cross-sectoral business association representing global companies across multiple sectors headquartered in the U.S. and EU. TABC stands out as the only transatlantic business organization uniquely placed to provide one voice for EU and U.S. companies on international trade and investment issues.