It’s finally here, the elections that nobody expected would take place in the UK are happening in just 3 days time. Across the EU-27, the election campaigns are focusing on the future of the EU with anti-EU forces threatening to coalesce around a unified anti-EU group.

However, as I argue in a new blog piece, while the narrative seems to be presenting a new surge of anti-EU MEPs, the reality is very different indeed. There is no denying that pro-EU groups such as the EPP and the S&D are set to suffer some big losses, to the benefit of anti-EU groups, but the narrative misses that a predicted strong performance from ALDE + En Marche will allow for a retention of a strong pro-EU majority in the European Parliament.

Wrongly or not, many in the UK will be asking what the point is in voting in an election for MEPs that are, on paper, expected to be leaving by October 31st. As I have argued in the past, these elections are critical for the future of the EU and, in our case, EU transport policy. The new European Parliament will be more unpredictable than any iteration prior, but we will see more ambitious legislation due to a strong pro-EU majority that will seek more Europe in response to the ever-present anti-EU forces. Where does that leave the UK? Well, for the time being, we will have a significant say in this process as the new European Parliament considers the next European Commission and seeks to build on an ambitious mandate that has seen plenty of transport-related legislation.

I will be speaking at the European Sea Ports Organisation’s 16th Annual Conference ‘Europe’s Ports in a New World‘ in Livorno at the end of this week. I will be taking my European elections message with me and will be continuing to promote our position at UKTiE that Brexit is not the end of the UK’s involvement in the EU.

This week’s song of the week, is Electioneering by Radiohead.

1. European Elections blog
In his most recent blog, Mark writes about ‘How to fact check the EU election results’. With the emergence of a narrative of yet another anti-EU surge in the upcoming elections, Mark takes a look at why this is a misrepresentation of an election that will see retention of a strong pro-EU majority, one potentially bigger than the current grand coalition majority that the EPP and the S&D have enjoyed. The headlines will certainly be highlighting the big losses the EPP and the S&D will suffer, 51 according to the latest projections, but these would be ignoring a strong performance by ALDE + En Marche that will stem the tide towards the anti-EU forces. 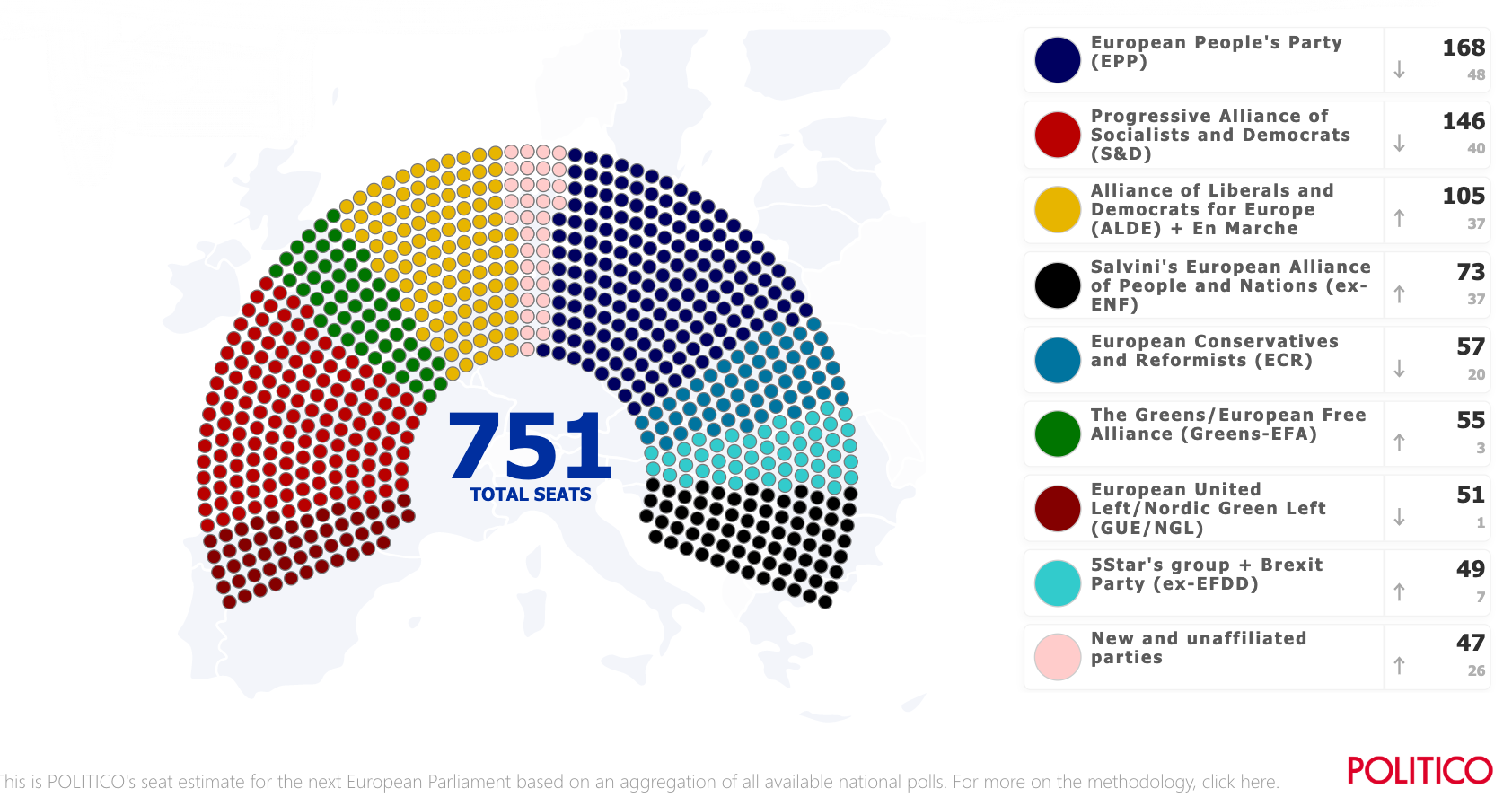 As per the latest projections, as shown above courtesy of Politico’s election data,  we can clearly see that while the new European Parliament will be more fragmented and unpredictable, the pro-EU majority will be retained and we can therefore expect most of the focus to be on how the pro-EU parties will work together, formally or informally. Forecasts suggest that the anti-EU forces will, once again, fail to coalesce around one group.

3. Implications of the elections
Far from driving the pro-EU project to a halt, the elections will result in pro-EU forces retaining their majority and believing that more Europe is the solution to the issues that have resulted in a consolidation of the anti-EU forces to remain a hefty block in the European Parliament. What this means, in practice, is that we can expect more European action and, potentially, more ambitious stances from the Parliament that will seek to be the driver of pro-EU policy and legislation. The lead candidate for the EPP, Manfred Weber, has promised to accept all European Parliament initiatives as Commission President, therefore giving the Parliament a de facto right of initiative in the next mandate. On transport policy, we can certainly expect further action from the European Parliament on decarbonisation, digitalisation, as well as it contributing to work on a new Transport White Paper.

4. UKTiE has also put together the latest timetable for Brexit. We will keep this up to date as the process develops: