This is it, last chance saloon for a deal on Brexit unless it isn’t (see last few years for evidence). Deal or no deal, we are still in the easier part of this Brexit process. Far from being the end of the process, as depicted in the media at times, this is just the beginning as the departure discussions will roll into future relationship discussions. As we have seen from the divorce negotiations, it has been the forward-looking elements that have been the biggest obstacles such as the Irish border. But this is not the only issue, as the current proposals have omitted the previous regulatory alignment commitments made under Theresa May’s government. A new report from UK in a Changing Europe has highlighted this as a major obstacle to a future trade deal with the EU (more on that below).

The EU has now been put in a rather delicate position following months of considering Brexit a past issue, there is real risk now that the divorce negotiations will spill over into the new European Commission’s mandate. This is something that countries like France are ardently opposed to as they wish to see the Brexit process concluded before then, do or die (deal or no deal). When this week’s European Council summit moves onto its Brexit discussions around an extension, we should not fool ourselves into thinking this will be a straightforward discussion as some Member States have serious reservations about yet another, potentially meaningless, extension.

For those of us in transport, and wider UK industry, the current proposals, without the level playing field provisions, are quite simply not good enough. Regulatory alignment is something that we, and indeed most of UK industry, have been calling for as a bare minimum of any Brexit deal. The removal of these provisions so close to the end of the negotiations removes the proverbial carpet from under the feet of businesses who had begun to expect regulatory alignment as a de facto aspect of their post-Brexit world.

This week’s song of the week, is Backstop by Article 54.

1. Industry backlash to Government Brexit plans
Following the new UK Government proposals on the Irish backstop that have paved the way for recent progress in the Brexit negotiations, Some key UK industry players have come out against these proposals as they seek low alignment with EU regulations, and do not have level playing field conditions attached on the environmental, social and labour standards, as proposed in Theresa May’s deal. The aerospace, automotive, chemicals, food and drink and pharmaceutical have come out against the new plans, warning they could pose “serious risk to manufacturing competitiveness”. Specifically on transport, the UK’s aerospace industry body the ADS wrote to the government asking for “reassurance” that there would be “continued membership of the European Aviation Safety Agency (EASA) and alignment with EU chemicals regulations” which “are vital for our sector”. We’ve always maintained close relationship with EASA, ERA, and EMSA as vital to any future UK-EU relationship.

3. New UK proposals would make UK-EU FTA more difficult
A new report from think-tank UK in a Changing Europe has concluded that the recent Brexit proposals from the UK Government, while reviving the Brexit negotiations, will create a stark future for the UK economy. As the report concludes, these new proposals will make the UK economy worse off than the deal agreed by Theresa May’s Government. The below infographic compares Theresa May’s deal to the new proposals from Boris Johnson’s Government. The Johnson government has refused to sign up to EU level playing field provisions on labour and environmental standards. The proximity of the UK mean that it would insist on such provisions in return for access to the EU market. Without them it will be difficult for the UK to reach a comprehensive free trade agreement with the bloc. 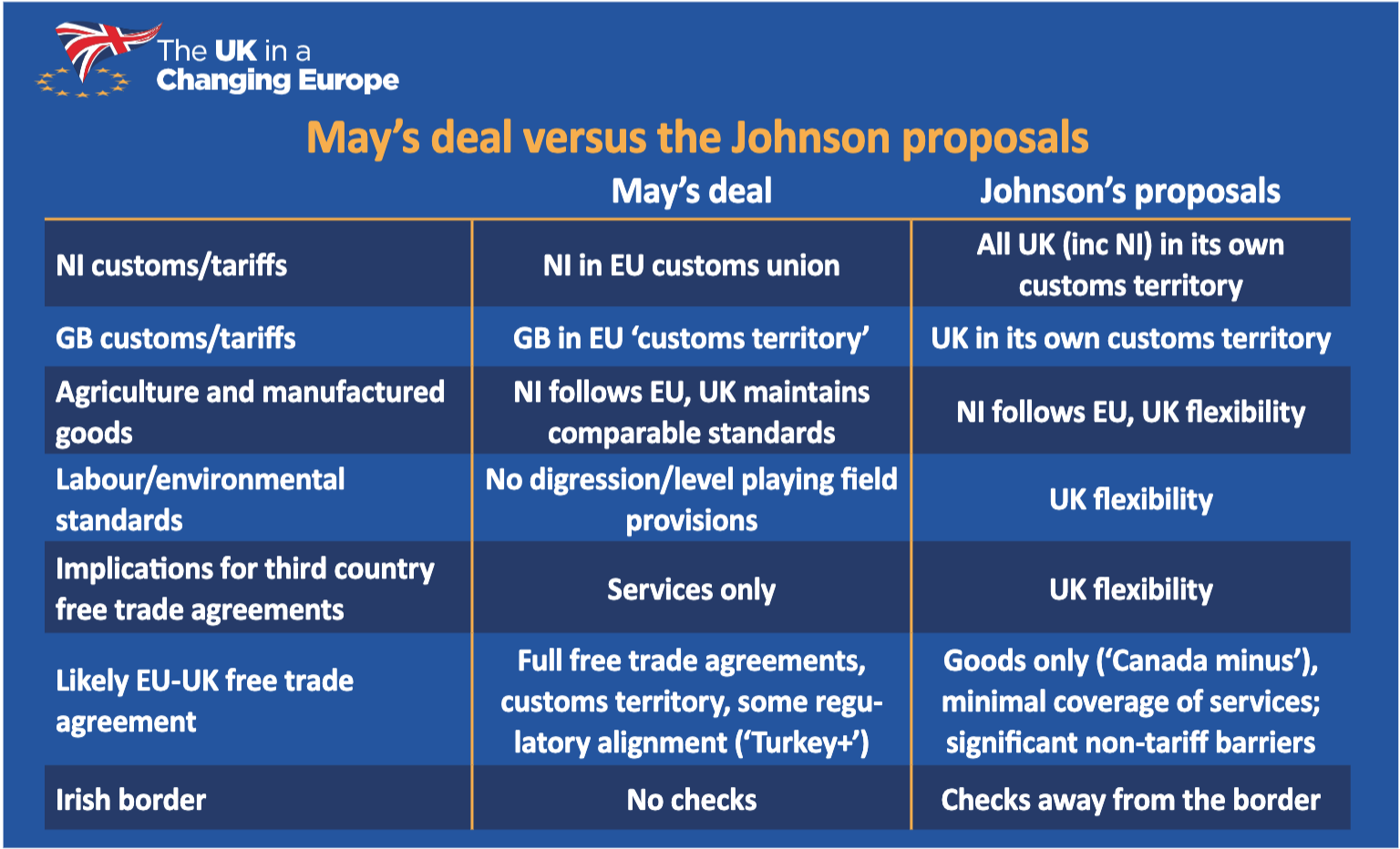 4. EU gets serious on Belt and Road initiative?
Following UKTiE Coordinator Mark Watts’ new blog and vlog this on China’s Belt and Road Initiative, which highlighted the big debate  over how Europe should respond. The Financial Times now reports that later this week the EU’s own Belt and Road will be revealed later this week when a ‘Wise Persons’ group tasked with finding some answers present their findings to EU27 ambassadors and finance ministers. The experts have been asked to examine whether the EU’s two major lenders — the European Investment Bank (EIB) and European Bank for Reconstruction and Development (EBRD) — are fit for purpose to serve as Europe’s 21st-century international development bank.