Welcome back to News & Views and my round up to all things EU, WattsUp!

Many thanks to those of you who were able to join the roundtable we hosted jointly with UKMis to discuss EU transport: Working Together to Promote UK Interests.

It was an amazing turnout, with 39 attendees, representing over 25 leading UK based transport organisations & firms, demonstrating the strong desire to look forward to next year and work together to promote UK transport interests.

We’re also very grateful to UKMIS for co-hosting this event with UKTiE, and to DfT, the Scottish & Welsh Governments & the Northern Ireland Executive, who also helped make the session a great success.

Thanks in particular to Madeleine Hallward from ABP and Darren Caplan from RIA, for putting the industry perspective, and helping us ensure we foster a genuine spirit of partnership between Government and industry.

A strong message from you all was that you wish to maintain strong ties with the EU, to develop the best possible relationships and work together for our mutual benefit. UK expertise and innovation has served the EU well over many years and can continue to do so in the years ahead.

The key to delivering on all this is maintaining, building and coordinating good relationships through regular engagement between transport businesses, the UK Government, the devolved Administrations, the EU in Brussels, and the 27 Member States. So we proposed that we should follow up the roundtable with a series of initiatives to facilitate that goal, to ensure the roundtable was the beginning of a process, not a one-off event.

Many of you shared that aspiration, and in particular thanks for all the excellent ideas, not least the three work streams that were suggested and endorsed:

Thanks to those of you who agreed to convene those work streams, which will report back to a re-convened plenary roundtable, early next year.

In the meantime we will look to convene a special event towards the end of the year, when the terms of the new relationship are clearer.

Do let me know if you wish to participate in the work streams, or require any further information.

We’ll continue to keep you posted about the future activities following the roundtable, including regular updates from UKTiE, unless you wish to unsubscribe from this circulation list.

Once again many thanks to all of you that made this launch event such a great success.

1. New 2030 Climate Target, what does this mean for transport?
During her State of the European Union address earlier this month, Ursula von der Leyen announced that having carried out its Impact Assessment, will support an increase to the EU’s 2030 Climate Target from 40% to *at least* 55% emissions reduction from 1990 levels. This proposal, meant to be the EU’s new contribution to the Paris Agreement, will now be considered by the European Parliament and the European Council.  The Climate Target Plan specifically emphasises that the transport sector has to be made substantially cleaner, with zero emissions vehicles replacing conventional ones, better development of public transport solutions, and greater use of sustainable transport modes.The transport sector is expected to step up from climate laggard to climate leader, a pathway that will be more clearly introduced in the Commission’s forthcoming Smart and Sustainable Mobility Strategy.

2. What are transport policies are being considered by the European Commission?
The 2030 Climate Target has laid out an ambitious path that includes the transport sector spearheading the EU’s new climate ambitions. Although the Smart and Sustainable Mobility Strategy is forthcoming, below you will see an infographic showing the totality of what transport can expect over the coming months. 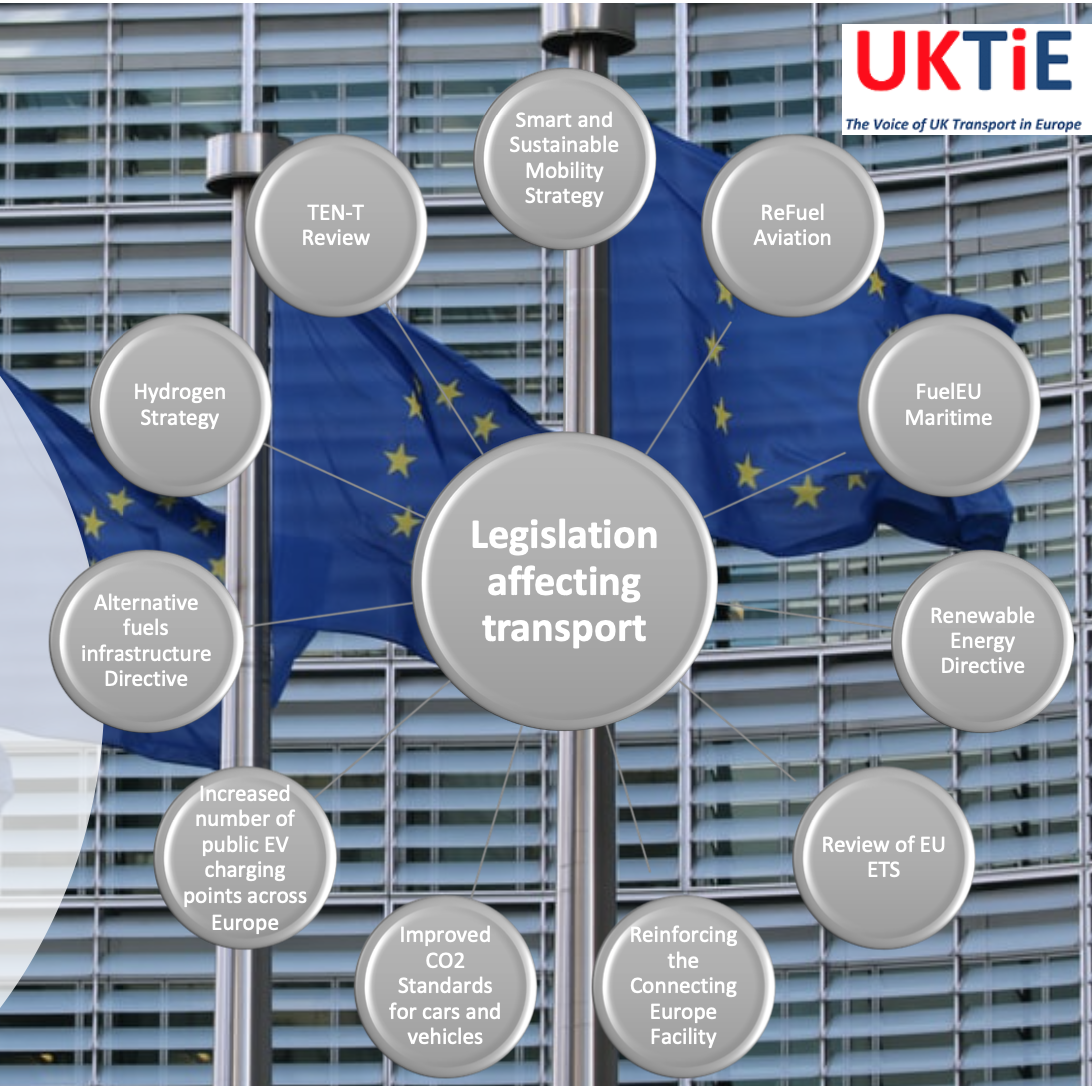 3. Brexit –  Can the 9th Round of Negotiations wield any progress?
With the 9th Round of Negotiations beginning yesterday in Brussels, the negotiation teams are hoping to tackle some of the most important obstacles to achieving a deal. As October will bring some form of deadline (end of the month according the Downing Street and mid-October according to Barnier). The UK’s recent Internal Market Bill is still overshadowing the negotiations, with the Vice-President of the European Commission, Maros Sefcovic reiterating Brussels’ request to withdraw the controversial elements of the text. Even though this round technically remains the last official one on the agenda, the expectation is for talks to continue past this week up until mid-October.

4. The European Way
UKTiE Coordinator Mark Watts has written a new blog on EU policymaking, across all sectors, is changing to fall in line with a new concept of European sovereignty, otherwise known as the ‘European Way’. What are the policy drivers behind this concept?

5. UKTiE has also put together the latest timetable. We will keep this up to date as the process develops: