This is another busy week for UKTiE as we prepare to analyse yet another round of crunch votes on Brexit in Westminster, whilst here in Brussels the EU 27 are preparing for an emergency Brexit summit scheduled for next week. Talk is of a long extension to the Article 50 process being offered to the UK, on the condition the UK has a new Brexit plan and agrees to participate in the EU elections.

Meanwhile, we are not sitting back and waiting for the politics to sort itself out. We will be meeting the Finnish Perm Rep, who will take over the EU’s rotating Presidency from July to December, at such a key time for the UK. We are also hosting a workshop for our members on Brexit preparedness, and meeting with the key major UK representative trade associations, the Engineering Employers’ Federation, British Chamber of Commerce in Belgium, and the Confederation of British Industry. The aim will be to discuss how we can work together in the future to influence EU transport policy and regulation post Brexit.

EU regulations will continue to apply whatever sort of Brexit we have. Further evidence of that was last week’s announcement by the DfT that controversial new EU regulations on mandatory speed limiting technology, which will be fitted into all vehicles sold in Europe from 2022, will to apply in the UK post Brexit. The safety measures approved by the European Commission include intelligent speed assistance (ISA), advanced emergency braking and lane-keeping technology,  warning of driver drowsiness and distraction, such as when using a smartphone while driving, and a data recorder in case of an accident. The EU says the plan could help avoid 140,000 serious injuries by 2038 and aims ultimately to cut road deaths to zero by 2050. The system can be overridden, but some are still criticizing the EU law, not least because of the so -called “spy on board”. It’s that new back box data recorder feature which I believe will ultimately have a bigger impact on driver behavior than any speed limitation device.

This is a taste of things to come. Whether it is road, rail, sea or air, all new EU regulations will in future be rubber stamped by London, because the cost of regulatory divergence is just too high, politically and commercially.

That’s why in addition to working out on a practical basis how we can work with our partners to influence EU proposals on a day to day basis when we no longer have a Commissioner, MEPs or access to Council Working Groups and Ministerial meetings, we are so keen to think more strategically and adopt a more long term perspective.  We need to agree what are our transport priorities, internationally, and here in the EU, and then seek to influence international and European organisations as upstream in the rule making process as possible. That’s the best way of exerting influence. We will be sharing our strategic priorities shortly. There is certainly a good case later this year of gathering all UK transport stakeholders together to align our priorities. Let me know what you think.

This week’s song of the week, is Crunch Time by Francisco Bolsa.

1. Indicative Votes Round 2
Tonight will see the second round of the indicative voting process in the House of Commons. Although no single option obtained a majority last week, tonight’s vote could see one of these options receiving a majority. Politico has put together a useful ‘cheat sheet’ of the Brexit options and what each one means: 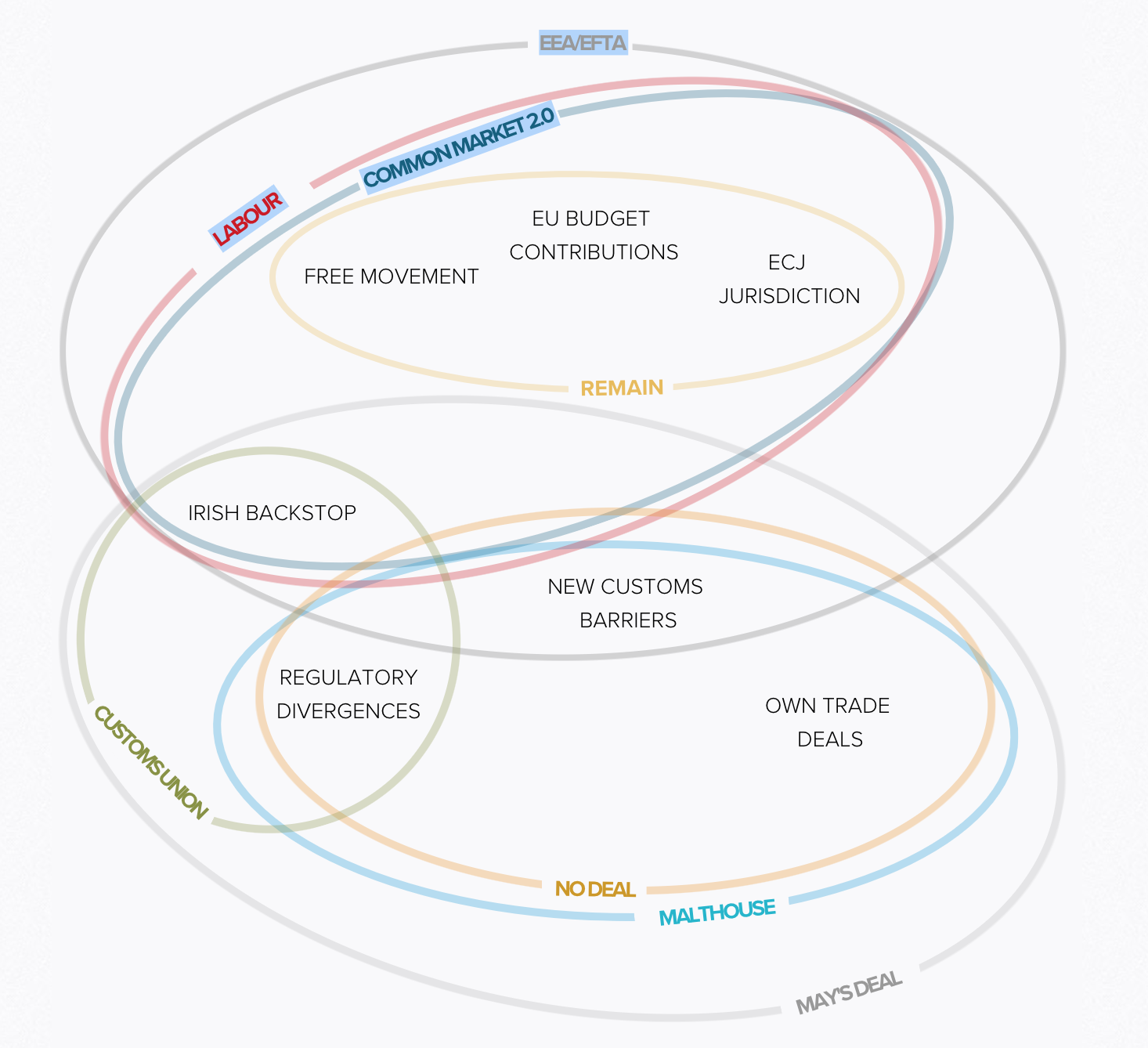 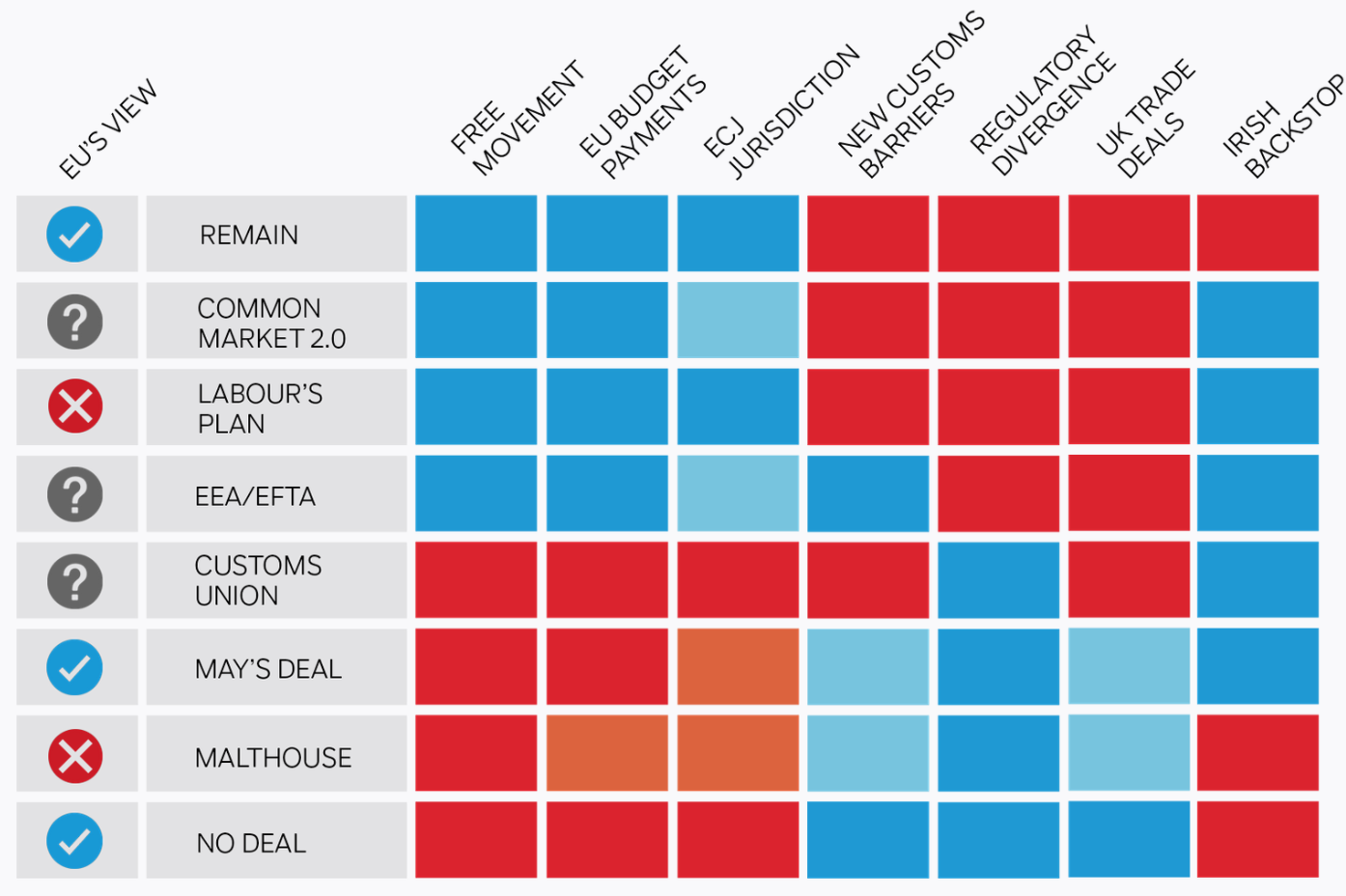 Even if any option does receive enough support from MPs, this option will in all likelihood be pitted against Theresa May’s deal later this week with a possible fourth Meaningful Vote being lined up. The big question being: will the indicative votes provide any indication and will any subsequent meaningful vote have any meaning for the way forward?

2. Chris Grayling tries to sell ferry capacity due to Brexit delay
The Financial Times reports that Chris Grayling, Britain’s transport secretary, is trying to sell two weeks’ worth of ferry capacity on the open market in an effort to recoup millions of pounds of taxpayers’ money because of the delay to the UK’s departure from the EU. At the end of last year, DfT agreed to three contracts for a trio of ferry operators to provide extra capacity for six months from March 29 in the event of a no-deal Brexit. Despite the March 29th date being delayed to April 12th and one of those contracts being rescinded, the Department for Transport is still committed to paying £89m to DFDS of Denmark and France’s Brittany Ferries to run extra ferries to transport medical supplies in case a no-deal Brexit leads to delays on the main Dover-Calais cross-channel route. As the No-Deal contingency ferry services will no longer be required between March 29th and April 12th, the government is trying to sell the ferry capacity it has booked with DFDS and Brittany between March 29 and April 12 in an attempt to recoup some taxpayers’ funds. The payment for that fortnight alone is about £6.5m. As the Financial Times also reported last month, Grayling could face an estimated bill of up to £28m from the DFDS and Brittany because there is no provision in the contracts for the start date to be delayed.

3. Lorry drivers ‘mystified’ as no-deal Brexit transport plan activated
The Road Haulage Association (RHA) has claimed that lorry drivers are “mystified” as to why no-deal Brexit plans have been brought in so early, branding the idea “inflexible” and “outdated”. The claim was made last week after the deployment of Operation Brock, which sees lorries heading for Europe driving at 30mph along the coastbound carriage of the M20. An RHA spokesperson said that “Highways England originally planned to implement Operation Brock as a Brexit contingency…the RHA is therefore mystified as to why, considering the fact that Brexit is now over two weeks away, Brock has already been activated”. Dover MP Charlie Elphicke said he had “serious concerns” about introducing Operation Brock as it was “pointless during normal conditions”.

4. Cross-border transport businesses brace for no-deal Brexit ‘chaos’
CGTN reports that demand for road freight transportation at the Dover-Calais border increases six percent year on year. But Brexit, especially a hard Brexit, poses a substantial risk to the industry, even now that Brexit has been delayed until April 12. The article highlights that as soon as Brexit kicks in, there will be border checks leading to delays. Over 2.6 million trucks run through the border every  year, which means 10,000 trucks a day, 300 trucks an hour, and 12 trucks every second. And border-checking delays would definitely impact border transport businesses. However, in an attempt to quell most of the major unrest from a hard Brexit, temporary agreements will go into effect that will allow trucking companies to keep calm and carry on for nine months. And the UK government will also slash tariffs on 87 percent of imported goods to zero to help ease the border checking process.

5. Congestion: What are we waiting for?
In his new blog, Mark takes a look at congestion in the major EU cities and asks: with the average motorist in Paris, Rome and London spending 10 days a year stuck in traffic jams, and the average last km speed now down to around just 12 km/hr in all three cities, what is the EU waiting for to take action on congestion? And, what can be done about it?