The European Council last night granted the UK a six-month extension to Brexit, after five hours of talks in Brussels. The new deadline – 31 October (Halloween) averts the prospect of a no deal Brexit on Friday.

And whilst the UK can leave before then if the deal is agreed by UK MPs, it will have to leave without a deal on 1 June 2019 if it does not hold European elections.  So my expectation now is that the UK will participate in the European elections. Preparations are already underway

The significant change that justified the extension was the UK Prime Minister’s decision to commence negotiations with the UK Labour opposition, and the prospect of a deal which leaves the Withdrawal Agreement intact, but makes changes to the Political Declaration that the EU could live with. For example agreeing to Labour’s demands for a Customs Union with the EU.

However, the primary aim of the Labour Opposition is to force a General Election, and if that is not possible then a Second Referendum on the deal, rather than facilitating a deal. So the  extra time therefore may not be used productively but could just facilitate a continuation of the current impasse.

Under the terms of the latest Brexit delay, the EU27 included a review point at the bloc’s scheduled June summit, although Mr Tusk stressed this would not present another “cliff edge”. It is not inconceivable therefore that the UK will seek extra time at some point during this extension.

There is also a risk that even if the deal is agreed that a new Conservative leader (Theresa May has pledged to quit if her deal is agreed) will seek to renegotiate the deal, or even unilaterally withdrawal from it.

The European Council President Donald Tusk said his “message to British friends” was “please do not waste this time”. Unfortunately, that is exactly what UK Parliamentarians are likely to do, so a no deal Brexit remains a strong possibility.

This week’s song of the week, is Every Day is Halloween by Ministry.

1. Brexit delayed to October
Last night, the European Council agreed to delay Brexit by up to six months until October 31st 2019. Far longer than the initial request by Theresa May for an extension until June 30th, this extension foresees the UK holding European elections by June 1st or else it will have to leave the EU without a deal. The UK will also be able to leave before the October deadline should it ratify the withdrawal agreement at any time between now and October. Speaking after the European Council agreement, Donald Tusk said “Let me finish with a message to our British friends: This extension is as flexible as I expected, and a little bit shorter than I expected, but it’s still enough to find the best possible solution. Please do not waste this time.” The delay suits the EU for several reasons, it doesn’t force them to plan for a UK Commissioner and postpones Brexit from their collective agendas until after the European elections.

This week marks the entry into force of the ULEZ (Ultra Low Emission Zone) in London. Transport for London marked the one month countdown with a press release. As the Press Release states, “Air pollution in London is responsible for thousands of premature deaths every year, affecting vulnerable people the most. The central London ULEZ – in operation 24 hours a day, seven days a week across the current Congestion Charge Zone – will help take the most polluting vehicles off London’s streets. It is a central part of the Mayor’s far-reaching work to protect London’s health from harmful air pollution and will see harmful NOx (Nitrogen Oxides) road transport emissions reduce by 45 per cent in its first year.” 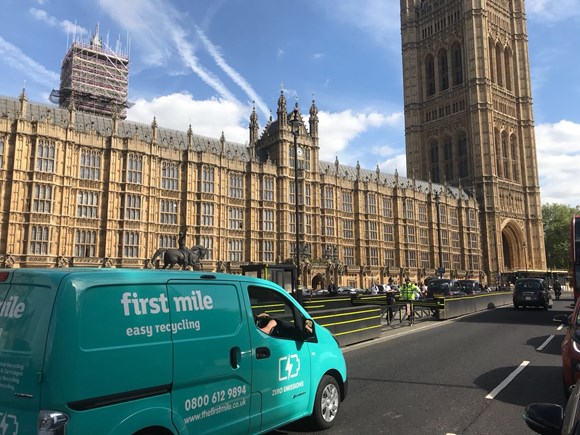 3. Brexit is absorbing the oxygen needed to solve other problems
Writing in the Financial Times, Camilla Cavendish, former head of the Downing Street Policy Unit, and a senior fellow at Harvard University, writes that “The Brexit vortex has sucked us all in. When I can tear myself away from the latest developments, I idly wonder what effect this interminable soap opera must be having on Britain’s productivity…The same is true of Whitehall, where non-Brexit activity has ground virtually to a halt. The Number 10 communications “grid” is shorn of virtually everything bar Brexit: announcements on anything else are repeatedly shelved. Reports languish unpublished, and policies sit in limbo, while officials grapple with Brexit planning and ministers are distracted by political manoeuvring”. With a shortage of bandwidth for projects looking beyond Brexit, a backlog has been created in policies needing to be passed that have fallen into the Brexit vortex. While Parliament and the Government may need a Brexit extension, the ignored domestic political agenda may come back to haunt them.

4. Businesses breathe a heavy sigh of relief after Brexit extension granted
Northern Ireland business groups said they breathed a “sigh of relief” after the EU granted the UK a six-month extension to Brexit. Stephen Kelly from Manufacturing NI said the UK parliament now had to “make its mind up about what it wants to do around Brexit…Only at that point will our businesses feel fully relieved”. Although the extension means the UK will not leave the EU without a deal on Friday, businesses are still spending hundreds of millions of pounds to mitigate against a no-deal Brexit, preparations that will need to continue in the event of a No-Deal Brexit in June.

5. Why we should expect an EU Transport White Paper in 2020
In his new blog, Mark writes that looking at all the evidence, he says we should be expecting an EU Transport White Paper in 2020 to replace the last one written in 2011. Mark further adds that the last White Paper, from 2011, reads like something from a different era. The thinking of 2011’s White Paper was very much influenced by the economic crisis, and adopted a growth first approach, emphasising the completion of the Single European Transport Area. It also abandoned the modal shift commitment, which was the focus of the much greener 2001 White Paper, launched by the then Transport Commissioner Neil Kinnock.