I’ve always been optimistic that there would be a withdrawal deal, and despite some very difficult moments it was always in the UK and EU’s common interest to ensure they negotiated a settlement. In the end, this best available deal for the UK is better than no deal.

Let’s consider what we have achieved.

As an industry we’ve always wanted the best possible Brexit. We made the case that transport should be a priority in the negotiations, and I think we can all be proud that thanks to our collective efforts this turned out to be the case. I remember those early speeches and debates where transport barely got a mention. Indeed, in the end the potential no-deal consequences for transport and customs, and their impact on the supply chain, business and citizens on both sides of the channel and across the Irish border gave the negotiations much needed momentum and forced both sides to compromise.

We pressed for our citizens, customers and employees to be at the very centre of the withdrawal deal, and that’s very much the case.

We helped secure perhaps the most important part of the deal, namely a 21 to 45 months transition or implementation period. That’s a huge victory. We were among the very first organisations to call for a transition. I remember when we were told it would not be necessary!

We sought minimum disruption to the functioning of the Single European Transport Area, and for border controls to be as seamless and frictionless as possible. Again, I think we can be pleased that during the long transition we will not face disruption at our borders.

We demanded regulatory alignment so trade and travel could continue unhindered by regulatory uncertainty. That’s been achieved too.

We have not yet been successful in our demands that the UK continues at a governmental and industry level to participate in the work of the relevant EU Agencies, including EASA, EMSA and the European Union Agency for Railways.

We were determined from the outset to work constructively with the UK Government, EU institutions, national capitals and our partners in the Member States, and share our knowledge and know-how. I can’t thank enough our members and partners, particularly in Westminster, Whitehall the EU institutions, and the industry, trade associations and think-tanks across Europe, for their unwavering support.

But let’s not forget that this is only half a deal. The real negotiations on the future relationship have yet to begin.  An outline has been agreed, but it’s only a political declaration. It is not a legally binding treaty. Now comes our chance to continue to advance our agenda, including that all important participation in the EU agencies, more accountability in the proposed ‘Joint Committee’ decision-making structure and for more ambition regarding the need for smooth borders.

For those negotiations to be a success we will need all the goodwill we’ve built so far to be nurtured and sustained. The bare-bones political declaration for transport is only the starting point. From 29 March next year, when phase 2 of the negotiations begin, we must continue to press for a transport deal that goes further, faster and is fairer.

Of course the House of Commons may yet jettison all this. But let’s consider that next week. Our mantra has, after all, always been hope for the best, prepare for the worst!

1. Consequences of No-Deal Brexit on transport
A study by the Policy Department for Structural and Cohesion Policies, commissioned by the TRAN Committee, is being presented today on the consequences of a No-Deal Brexit scenario on transport and tourism. The study investigates the potential impacts on the EU-27 of a no-deal scenario in the Brexit process, focusing on the transport, postal and tourism sectors. The study analyses both the economic policy and legislative dimension, detailing the practical consequences of such a new status quo. The study found that In general terms, a no-deal Brexit would mean that the UK exits the EU internal market for aviation, road, rail and maritime transport. As a result, new customs, regulatory authorisations and license procedures, as well as border controls would impact operations and all current EU law-based rights and obligations would cease. Regarding customs, the study found that leaving the Customs Union would mean that the current (and simplified) system for trade of goods would no longer exist. This could lead to cancellations of shipments or lower revenue for freight operators, among others. This study, being presented today to the TRAN Committee, highlights the stark realities surrounding the consequences of a No-Deal Brexit on the transport sector.

2. 8 days to save Brexit?
In an interview with the Sunday Times, Theresa May said there were just 9 days to save Brexit before parliament votes on what would be among the most “significant in this country’s history in recent years”. Debate on the Withdrawal Agreement begins tomorrow in the House of Commons with the fate of the deal looking increasingly bleak. Ahead of the vote on December 11, there will be a five-day debate in Parliament, December 4, 5, 6, 10 and 11, where MPs will be able to put forward amendments to the Brexit bill with a maximum of six chosen by the Speaker of the House. Once the initial deal has been agreed by the Commons, the Withdrawal and Implementation Bill will have to go through Parliament which will mean that it will have to go through the full legislative process of being debated on and passed in both chambers before it is officially approved. As the Guardian writes, “the events of the next week will be increasingly fast-moving. The precise political options and effects of the votes on 11 December will be difficult to judge until the day itself. At the outset, however, there seem currently to be four main options: no deal at all, Mrs May’s deal, a softer form of Brexit deal, and a second referendum. Of these, two are clearly ruled out.” An infographic from the House of Commons, shown below, demonstrates the wide variety of outcomes that the December 11th vote could trigger. One option that isn’t mapped out, however, is one where the Government pulls the vote from December 11th and tries to get further concessions from the EU. 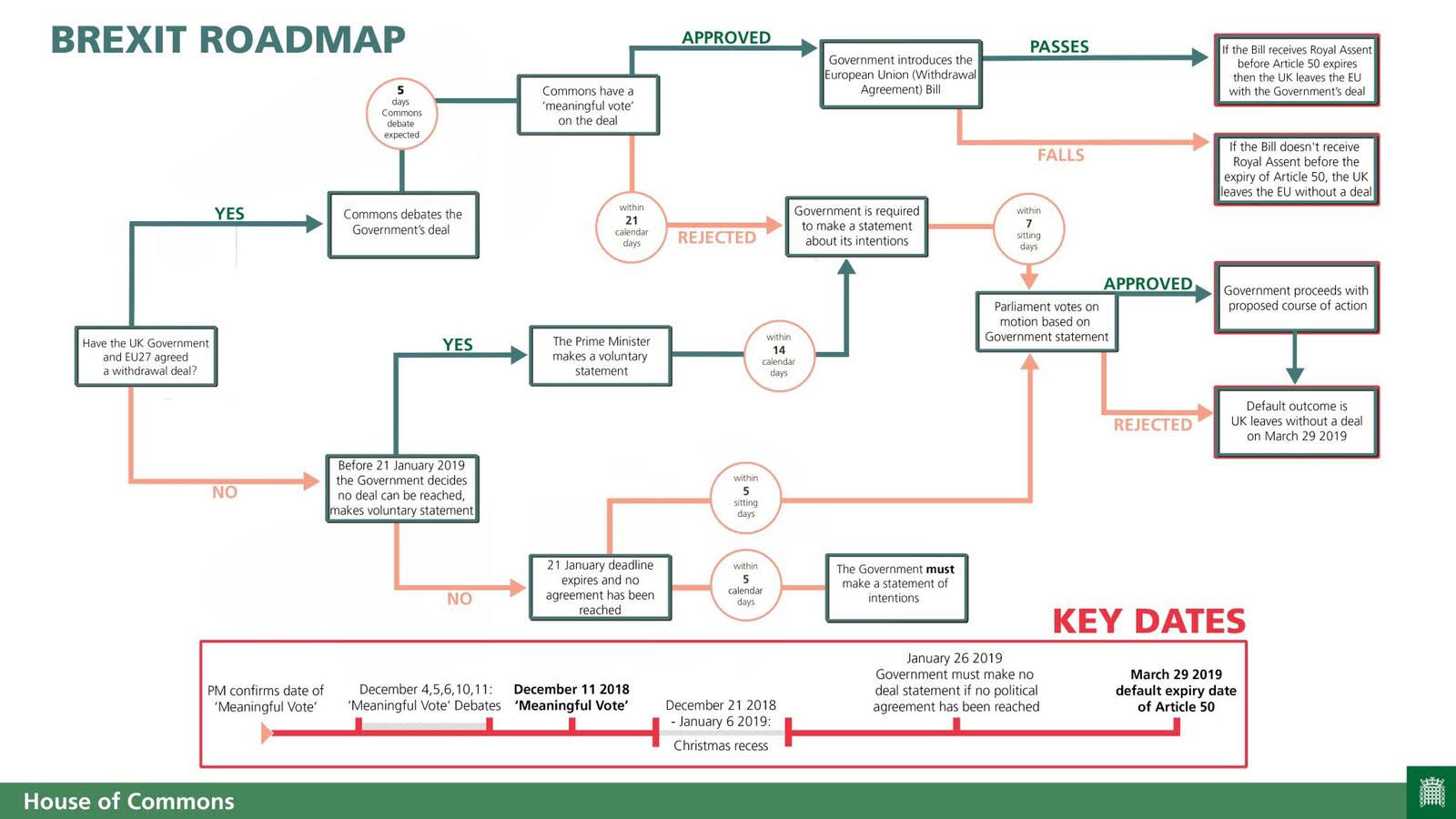 2. Risk of No-Deal Brexit choking UK ports rising
According to a report from the the House of Commons Public Accounts Committee titled “Department for Transport’s implementation of Brexit”, UK ports are increasingly at risk of facing major disruptions if there’s a no-deal Brexit as a “complacent” transport department makes slow progress with preparations. The committee further added that the government has yet to test its so-called “Project Brock,” which envisages turning part of a highway near the port of Dover into a holding area for trucks. With the risk of No-Deal being at an all-time high, due to the vulnerable status of Theresa May’s deal, the committee found that “there is a significant and growing risk that the transport department will not be ready in such a scenario” and that the transport department’s preparations for avoiding disruption around major ports are worryingly under-developed.” The committee also highlighted that businesses have been kept in the dark as the government discussions were conducted in secrecy, handicapping their ability to prepare for a no-deal outcome. This has left contingency plans like road hauliers potentially changing their routes or point of entry into Europe, and the process of registering trailers for road haulage permits, are subject to the government’s non-disclosure agreements.

3. Banking on keeping industry happy
Financial News writes that any goodwill that Theresa May was banking on from the financial sector may have evaporated after backlash to letters received by banks from the Financial Conduct Authority warning them not to needlessly shift business out of the UK ahead of the country’s exit from the European Union. The Financial Conduct Authority further warned the banks that moving non-European clients to their EU entities isn’t necessary, and could unduly expose them to new rules and increased costs. The backlash has included accusations that the letters were “politically motivated” to keep business in the UK. This seems to be an unfortunate reality of the Government’s balancing act between trying to properly warn businesses of Brexit risks and asserting that they should not take any premature action such as moving their business to the EU.