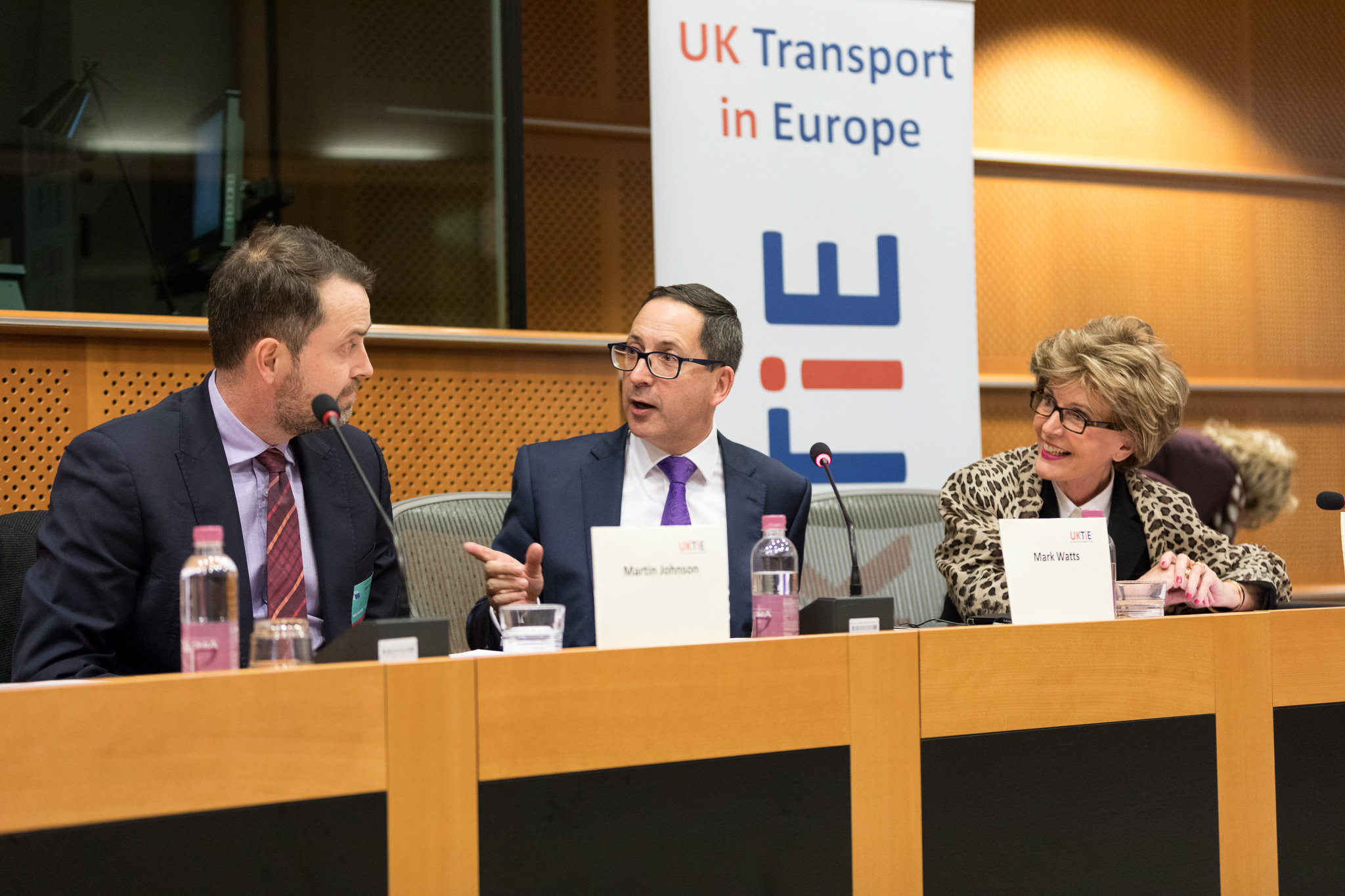 Hailed as the ‘best ever’ by Jacqueline Foster, our Host MEP and UKTiE Patron and President, last week’s UKTiE Forum was held at the European Parliament. With the EU planning the biggest ever shake up of transport in the coming years UKTiE is planning on stepping up its engagement with European and international partners, the Forum saw a record number of representatives from the UK’s leading road, rail, maritime and aviation companies and organisations gather to discuss the future of European transport. In concluding the Forum, I said that the level of integration and connectivity of Europe’s transport systems is so high it is essential we step up our engagement with our European and international partners. In the coming years UKTiE will play a leading role in facilitating the dialogue and cooperation that is necessary in order to ensure we continue to provide citizens and businesses with the clean, connected and competitive transport they need.

On Brexit, we are also witnessing what appears to be the start of a make-or-break week for progress into Phase 2 of the Brexit negotiations before 2018. This weekend saw diplomats on both sides trying to hammer out a deal to conclude Phase 1 and move onto Phase 2, where we hope deals on issues such as transport can be discussed. This past week saw deadlines and red lines as the main issues of discussion in Brussels and I expect this to hold true for this week as well. Word here on the ground is that the EU side remain optimistic despite yesterday’s evident setback on the Brexit divorce issues. The next days are crucial and we will be monitoring the events closely.

1. Successful UKTiE Forum puts the future of European transport front and centre
With representatives from the European Sea Ports Organisation, FNTR, Airlines4Europe, the OECD’s International Transport Forum, the UK’s Department for Exiting the European Union and leading MEPs; the UKTiE Forum witnessed constructive discussions surrounding leading issues relating to the future of European transport. The multi-modal character of UKTiE, and of the Forum, gave the representatives the chance for some cross-fertilization of ideas and best practices necessary to make the transport sector ready to accommodate the big changes that are underway at the European level. The forum also gave the chance for UK transport companies and organisations to participate in the discussions and engage with European partners, something which Lucy Anderson MEP highlighted when she said “It is vital we maintain good links with the EU whatever the outcome of Brexit. In particular, it is vital we remain part of the TEN-T network and the Single European Rail Area, and that we retain our membership of the EU transport agencies.”

Looking ahead to 2018, the next major UKTiE event is a roundtable in the European Parliament with Henrik Hololei. Director-General of DG MOVE on Tuesday 27 February. If you would like information on the EU’s plans to transform transport regulations then please contact us.

2. D-Day? Momentum Monday? The day where everything was supposed to happen but nothing was agreed- Just another day of Brexit.
Throughout Monday, there were rumours of Juncker and May announcing an agreement on the divorce issues but in a late afternoon press conference yesterday, Juncker said “Despite best efforts… not possible to reach an agreement today”. Katya Adler of the BBC tweeted that an EU diplomat told her that the EU is on standby now UK internal politics to play out. Laura Kuenssberg of the BBC also reported that the opposition was told to expect a ‘major statement’ from the Prime Minister today in the House of Commons which could have lasted several hours which is now cancelled. All indications suggest that a deal was close and agreed in principle, leading to both disbelief at yesterday’s events but also hope for an eventual agreement this week.

With reports emerging that the UK was willing to concede a special status to Northern Ireland, UKTiE was informed by a source that the wording of the draft agreement was along the lines of “UK will ensure that continued regulatory alignment with those rules of the internal market and the customs union which, now or in the future, support North South cooperation and the protection of the Good Friday Agreement”. Juncker and Theresa May confirmed that while an agreement had not been reached, that both sides would reconvene before the end of the week and continue negotiations. Are you concerned with what this means for the Brexit negotiations? Contact us if you would like to know what insights UKTiE has been hearing about the  political realities surrounding the negotiations.

3. As the December European Council summit approaches, all eyes remain on the Irish border issue
As featured this week in The Economist and exemplified by yesterday’s events, the Irish border question has become “one of the trickiest issues of the exit talks”. The article covers the compromises that will need to be made in order for the Irish border issue to move from tricky issue to deal breaker. Redrawing one of the government’s red lines, namely that of membership of the Customs Union, which the UK wants to be out of in order to negotiate its own trade deals. Remaining in the Customs Union would remove the Irish border issue as a problem. Right now the Customs Union red line is forcing the UK government towards the unwanted prospect of a border between Northern Ireland and Ireland which would break down the Good Friday Agreement. However, as the article covers, the UK seems prepared to blur the red line as it appears reportedly prepared to give Northern Ireland new powers allowing it to follow the same regulatory regime as the EU in areas such as agriculture and energy, where there is most cross-border trade. However, such a move could prove fatal to Theresa May’s majority at Westminster as Arlene Foster and the 10 DUP MPs have made clear that any such move could see them withdraw support from her fragile administration. As we approach the December European Council Summit, an apparent make-or-break moment in the Brexit negotiations, Donald Tusk gave Ireland a visit in a show of support for Ireland’s stance towards the border issue saying “ the UK’s future lies in some ways in Dublin”.

4. UK Government to tell EU leaders that it wishes to remain in the European Aviation Safety Agency (EASA) despite ECJ role
In what is being labelled as a ‘blurring’ of one of the UK government’s Brexit negotiations red lines, Sky News are reporting that the UK will ask to remain in EASA, which runs safety and maintenance checks and sets crucial standards across Europe and the UK, despite it falling under the jurisdiction of the European Court of Justice. The supposed loosening of this red line comes in the wake of pressure not just from UK and European airlines, but also from the US Federal Aviation Authority, which has told Britain it has weeks to come up with a legal structure for aviation safety, and will be subject to checks by US inspectors. The government is exploring Article 66 of EASA regulations, allowing for third party participation, however under Article 50 of the same EASA rules, the European Court of Justice is the ultimate arbiter of EASA rulings. The European Court of Justice may not have direct jurisdiction over the UK as a third party member of EASA, but its indirect jurisdiction could prove to be the compromise between the government’s red line and where businesses stand on the issue. As pointed out in the article, this ‘acceptance’ of indirect European Court of Justice jurisdiction could pave the way for the UK taken on the “Norway model” and remaining in the European Economic Area. If you would like more information on what third-country status means then contact us.

5. UKTiE Supported by IDA Group
UKTiE’s work is supported by IDA Group. IDA Group is a highly specialized consultancy for governmental affairs, reputation management, trade and funding. They share the belief in effective dialogue built upon trust and mutual understanding. Their diverse team of experts includes seasoned diplomats, politicians, journalists, lawyers and designers, supported by a global network of trusted partners, can help create measurable impact for your business. You will find more information on IDA Group and what services they can provide you with here.

6. Sweden warns the UK not to emulate Norway-Sweden border post-Brexit
Speaking to Sky News, Ann Line, Sweden’s Europe Minister, poured cold water on the idea of frictionless trade post-Brexit as she said “It’s not possible to have frictionless trade if you are not part of the customs union and the single market.” One of the UK government’s ideas for the Irish border post-Brexit is to emulate the Sweden-Norway border, an idea that Ms. Line said does not represent the best option for a non-EU country as it would come as a shock to British people and businesses accustomed to experiencing no bureaucracy over travel and trade with continental Europe. She further went on to add that “we did research with 2,000 Swedish companies to say which country is the most difficult to have export relations to and number one was Norway and after that came China”. Ms. Line also criticized the UK government’s approach the Irish border question, saying “You cannot be half in the customs union, either you are or you’re not”.

7. The view from Paris: 40-strong France ‘Le Brexit’ task force preparing since the Brexit referendum
Under previous French President François Hollande and in the immediate aftermath of the Brexit referendum, France ordered 40 high-level civil servants to start planning for the U.K.’s departure. With members of the task force such as Philippe Léglise-Costa, then head of France’s EU affairs directorate now the France’s permanent representative in Brussels, and Bernard Cazeneuve, then the socialist government’s interior minister, gave France a head start in preparing for every possible outcome of Brexit. While Britain has also deployed an army of civil servants to work on possible Brexit outcomes, its “negotiating position is the subject of intense — and public — political wrangling, French administrators have enjoyed the freedom to prepare in quasi-secret, met by public indifference. In other words, Brexit became a technocratic challenge — of precisely the sort at which France excels”. The task force, in almost permanent virtual contact and holding regular physical meetings, has taken a head start in drawing up contingency plans examining all possible outcomes, including a “soft” and “hard” exit from the EU. If you would like more information on the French perspective and views on Brexit then please contact us.

8. UKTiE has also put together the latest timetable for Brexit. We will keep this up to date as the process develops: